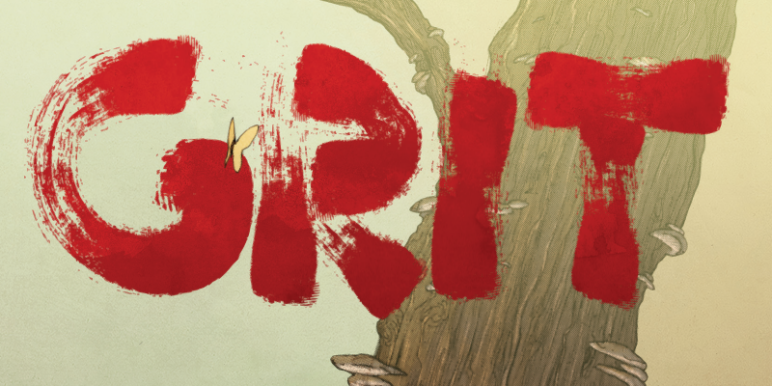 When I was introduced to GRIT, I decided to give it a read. The comic centers around Old Man Barrow, an “ageing monster hunter” who is very brutal in his monster hunting methods with the use of his axe. As the comic progresses, Barrow unexpectedly joins forces with Ari, “a hot-headed young witch dead set on breaking him of his ultra-violent habits.”  When I read the first two issues following issue #3, several things made me a fan of the comic.

The first thing that got me glued to the comic was the character dynamic between Barrow and Ari. The protagonist Barrow is a loner who hates people and witches. He spends most of his time hunting mythical creatures. He is a cleaner of the land hired by the local townspeople to hunt monsters. Barrows is also a hack and slash monsters first and asking questions later character.  But we learn that this monster hunter has a unique past that involves his mother doing horrible things.

Next, we are introduced to Ari, who is a firebrand witch that disapproves of Barrow’s brutal methods. Ari is seen as foil to the more calm but savage Barrow. As a witch, Ari can cast spells. In addition, she loves nature and is able to communicate with animals. She also is more methodical and strategic as seen in Issue#3 when she and Barrow take on the blood demon at Black Dog Bottom. Throughout the series, the two characters are hilariously almost at each other’s throats with Ari calling Barrow names and criticizing his violent behavior while Barrow, annoyed with the witch, tells her the nature of his job as a monster hunter. It is towards the end of Issue #3 that Ari’s view about his methods towards other creatures seem to have some effect on Barrow as he is seen giving up his sword to a man crying for help because monsters in his attic.

Another thing I liked about the comic was that both Wickman’s writing and Kevin Castaniero’s art help to create a unique world that was a fusion between fantasy and “southern-fried” wit. This is a fantasy story told in an almost Western theme. When I read Barrow’s dialogue, I can hear a deep Southern accent, almost like Jeffrey Dean Morgan (Walking Dead) or maybe Sam Elliot voice (The Hulk, Ghost Rider). As for Ari, I can only hear Monica Rial’s (Dragon Ball Super) voice which made me realize that it had a bit of a hilarious North vs South vibe in a fantasy world. Or maybe a millennial vs baby boomer vibe.  To me the art is a little reminiscent of anime or manga art when the facial reactions are used to express emotions, like Samurai Champloo. The way the characters and creatures are drawn by Castaniero and colored by Simon Gough give the comic a noir and rustic style. And I definitely cannot forget how awesome lettering done by Micah Myers was in this series, especially with the explosion scene in Issue #3 in which was caused by Ari.

I wonder if we will be seeing more of the misadventures of Barrow and his unique relationship with Ari. Issue #3 cannot mean the end of his monster hunting ways forever. And what about Ari? What is her story? And will she become someone who will become the closest thing Barrow has to a friend or family? I am looking forward to see how the gritty fantasy of worthy of the name GRIT unfolds.