I hope that all of you are had an awesome Memorial Day weekend. I am grateful for all the sacrifices the brave men and women made to preserve our freedoms. If it wasn’t for them, we wouldn’t be here and I can say that I probably would not be doing what I am doing right now: writing this blog.

Speaking of Memorial Day, the week before Memorial Day is always a favorite time for me because every year, I attend Phoenix Fan Fusion in Phoenix, AZ. Fan Fusion is Phoenix’s very own comic book and pop culture event and this year it was from May 23th to 26th. Like the San Diego Comic Con and like any convention, it has its vendors, panels, and guests. Two years straight, I only went to the event every Sunday however, I decided to go all four days and I have to say that it was uber fun.

On the very first day, I went to a writer’s workshop which involved science fiction. The workshop delved into how science fiction was not really far off from our reality. Certain topics discussed involved the physics behind Iron Man or the multiverse.

Next, I went to a panel called “So You Want To Know Comics?” This was a very interesting panel since it was hosted by two owners of Cab Comics in Flagstaff, AZ. In the panel, they talked about finding the hidden gems when reading various comic books. I have also learned about how some comics can be ordered trough the store using an app called Comicshub (might use it someday since there are several back issues I would like to order). We also talked about the revamped origin stories of superheroes as well as character development in comics. The biggest takeaway from that panel was the passion that comes with reading comics.

Day two of Fan Fusion got even more amazing and it took me back to my childhood. While standing in line to get an autograph from Amy Jo Johnson, Kimberly, the original Pink Power Ranger, I was once again six or seven years old and I realized that I had forgotten how much of a crush I had on her. She was and still is pretty to this day.  Amy Jo Johnson was really sweet and friendly especially when I told her that she was the one and the only Pink Power Ranger. Throughout that whole time, I was nervous but I pulled through and got the autograph.

Before that, I went to an awesome writer’s workshop that was hosted by Bryan Young, a freelance writer from Utah. Young has written for starwars.com and the Star Wars Insider magazine. This was a really awesome  panel for me because as an aspiring freelance writer, I had gotten a lot of awesome advice. Young had encouraged me to keep at my writing by hustling and forming relationships with editors, audiences, and fellow writers. I had also learned how to pitch ideas to editors in a professional manner.

On the third day of the event, it was just as amazing but it also was a day that really struck a cord. I say this because it was another day that took me back to my childhood since it involved Ray Park, the guy who played Darth Maul in Star Wars: The Phantom Menace (I will write an additional article on this awesome experience). To cut the long story short, I went to go get his autograph and when I was next, we just had a conversation about Star Wars and the Solo movie. But then it somehow got to exercising. He told me that he had hit a slump after getting injured but decided to get back in shape and that ever since, it has helped him. I told him that I had some trouble accepting the fact that I’m thin and that people at my work made comments about my body. Park looked at me and told me that what people said about my body did not matter and that I looked like I was in good shape. Even a fellow fan commented that I looked great and not to take what people said about my body personally. That moment, I felt my self esteem and confidence skyrocket. Here was Darth Maul giving me a pep talk like Mikey Goldmill to Rocky Balboa. Park also gave me advice on how to exercise and that it was not about being buff. That was a really cool experience and one that I hope to tell my children and grandchildren about.

On that same day, I purchased a hardcover copy of Batman vs Deathstoke graphic novel which was written by Christopher Priest. Priest was also at the event and had a little chat with him. He was hilariously talked about how he came about writing the story that involved a custody battle between Batman and Deathstroke over Damian Wayne. Priest was awesome to talk to and autographed my copy.

The next two days were devoted to going to more panels and going on a shopping haul. I bought eight funko pops, one of them being a Daryl Dixon (from Walking Dead) on his motorcycle bike. I also purchased a Walking Dead statue of Negan which I was surprised no one snagged.  I also bought a Star Wars Black Series action figure of Boba Fett and a Pikachu phone charged. Furthermore, I purchased the entire Marvel Zombies vs Army of Darkness comic series and Frank Millers Dark Knight Part Two.

I also connected with a comic shop in Glendale Az, called Drawn to Comics which has a cool podcast. I told them about the Podcast from Earth-2 which me and a group of friend collaborate on and they said that they would give it a listen. I hope to work with Drawn to Comics in the future or do something awesome involving our podcasts. 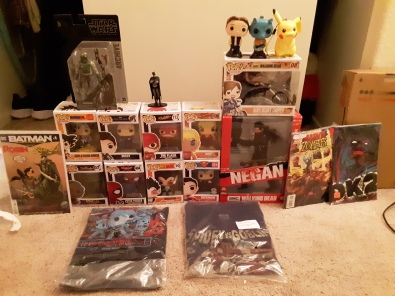 Are there any special or awesome moments you had at any of the comic or pop culture conventions you went to? Please feel free to leave a comment and don’t forget to hit the like button and subscribe if you like this article.  🙂