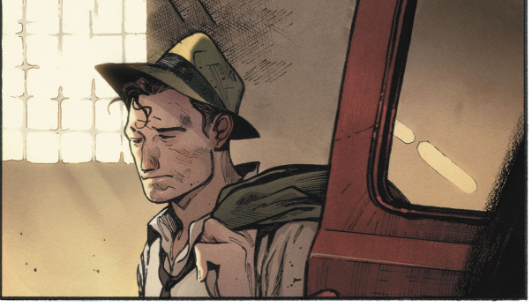 Almost any comic book junkie or Superman fan would know about the famous cover to the 1938 Action Comics #1. The cover shows Superman holding a green car over his shoulders and crashing it into a boulder while three guys are looking on and freaking out. And one of those guys is the center of the short story, “The Car.”

“The Car” was written by Geoff Johns and Richard Donner and illustrated by Oliver Coipel. Johns is known for his run on the Green Lantern series as well as Blackest Night and Brightest Day. Richard Donner is known for directing the Christopher Reeve Superman movies. When I purchased the comic, I had read several cool stories but this particular story had a profound effect on me.

The short comic book story takes place at a 1930’s era auto body shop right after the events of the Action Comics #1 cover. The green car is a total wreck from the front and the first page shows two mechanics examining it. One of them asks what happened to the car and the other mechanic replies that he would have to ask the owner.

It is in this scene where we are introduced to the main character of the story and one of the guys on the cover of Action Comics #1. The man’s name is Butch. The mechanic asks Butch if an elephant hit his car and there is a flashback scene of Butch and his cronies in the car with a kidnapped Lois Lane running into Superman. Butch replies:

The wrecked car after Action Comics #1 -1938. Property of DC Comics 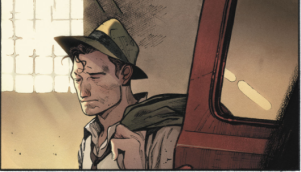 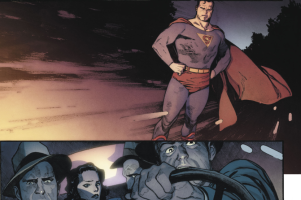 He then also tells the mechanic that the man in the red underwear hung him on a telephone pole. With its art, the story does a great job at showing how he mechanic is in disbelief at Butch’s claim. The mechanic smirks and implies that Butch has had too much to drink and advises him that he will have the repairs to his car quoted. He also advised that if it were up to him and given the state that the car is in, he would junk the car. Butch asks for a ride home but the mechanic rhetorically asks him if his place looks like a taxi service.

In the next scene, the comic panel shows Butch walking alone in the middle the junkyard outside the shop. This scene is a homage to the quote: “look up in the sky, it’s a bird, it’s a plane, it’s Superman!” When Butch looks up, at first thinks he sees a bird and then a plane only to see Superman ascending above him.

Superman calls the man by his name and chastises that he is a criminal who “gets away with just about everything” and “pushes the little guy around” and “dancing with whichever girl he picks out in a crowd.” Superman also notes to Butch that some people would that he “deserved to be back on that telephone pole. Or something higher.”

But Superman also informs Butch that he did some research on him and tells him that he knows that his father had died in World War I and that he had to look after his ailing mother. Superman also informs Butch that he knows that he became an orphan after his mother passed away. It is this scene that makes this story get interesting.

It is here that we see that Superman, being an orphan himself after his parents died on the doomed planet of Krypton, could relate to Butch.

Butch tells Superman that he was 13-years old when his mother died and whenever it got hot, he and the orphans had always wanted to go swimming but couldn’t due to having no pool.

The Man of Steel advises Butch to be a better person and advises that despite having “had your fair share of knocks” and “knocking the world back like you’ve done” he could make a decision. Superman encourages Butch to “be that person who wasn’t there for you for someone else.” And in poetic fashion, Superman gives Butch one piece of sage advise:

“It’s your life Butch, you can fix it…or you can junk it.”

Superman flies away from Butch and tells him that he would see him around.  After Superman flies away, we see Butch letting Superman’s wisdom marinate in his head. In the very last panel, we see a smiling and peaceful Butch, next to the newly repaired green car, opening up a fire hydrant for children who want to go swimming but can’t due to having no pool.

To me, Butch’s life was just like the green car that Superman crashed onto the boulder after rescuing Lois from the criminal and his cronies. The car was heavily damaged to the point where the mechanic advised to junk it since repairs on it would be expensive.

I talked to my sister about this scene and the year it took place and she noted that Butch must have had it tough getting by especially since he was living around the time of the Great Depression which had affected the lives of many Americans, especially those living in the Midwest.

Superman could have let Butch hang on the telephone pole but the Man of Steel knew Butch had a choice to change his life for the better or…like the car, he could just junk it since the cost would be too heavy. But the former criminal turned his life around and it can be assumed that after his encounter with Superman, he devoted his life to helping orphaned children and maybe even adopted one himself.  After all, Superman did advise Butch to “be that person who wasn’t there for you”, presumably a father or father-like figure, “for someone else.” Mind you, this probably didn’t happen overnight.

This story really appealed to me because Johns and Donner do an awesome job at writing how we are all like Butch. We feel that to get by in life, our adversity gives us the permission to act, or not act, and we ultimately pay the price. We have a Superman who would grab our cars and crash them into boulders and we are left with the choice to make our lives for the better or for the worse. I would be lying to you if I said that I did not have moments where I was Butch.

One notable Butch moment came when I was going through one of the hardest years at the University of California, Riverside. It was in a Journalism classes during the winter and spring quarters and I was struggling.  I felt that the 2008-09 school year  was plagued  with personal issues and with criticism of my writing when people were actually trying to help me. The not-so-sweet cherry on top was when a girl I had a crush on was dating another guy and even worse, she invited me to hang out with him, his cousin and her at the 2009 UCR Heat Block Party.

During Spring Semester, I was at my lowest and I spoke to my journalism professor who put me on blast for not doing my readings and that I often raised my hand too much instead of just listening to the lecture. My heart sank when she implied that she knew I was slacking off because she commented earlier that I was a smart guy and my writing had been improving the previous quarter. Like Superman, she grabbed my green car and rammed it into a boulder. And like Butch, I had a choice to either do better or continue to do worse.

I told my professor what I had been going through and she sat across from me and listened. I told her about my personal issues that were gnawing at me and about the girl I had a crush on. My professor smiled and advised me that to let the girl go and that she was not worth my time. She also advised me to listen more and to seek counselling. I think she also implied that she wanted me to be the writer I wanted to be instead of being the dude trying to prove to the world that he was a smart guy by raising his hand all the time. As a result, I rebounded and did good in the class which in turn helped me with my writing and adopt a more descriptive writing style.

That  day with my professor is one of the days that I cherish because, it taught me how to be more committed to my goals and less prideful and it also garnered an admiration for my professor. And when it came to the girl I had a crush on, I had finally accepted the fact that she was not interested in me and let her go after trying to work it out.

I know that the day is going to come where I run into a Butch who is only trying to get by in this world. And like my journalism professor and Superman, I am going to have grab that Butch’s green car and smash it into a boulder and advise him or her that he or she had a choice to make life for better or for worse. We all experience those moments whether from the point-of-view of a Butch or a Superman.

If there is anything that “The Car” taught me, it is that when it comes to our lives, we always have a choice to “fix it…or you can junk it.”