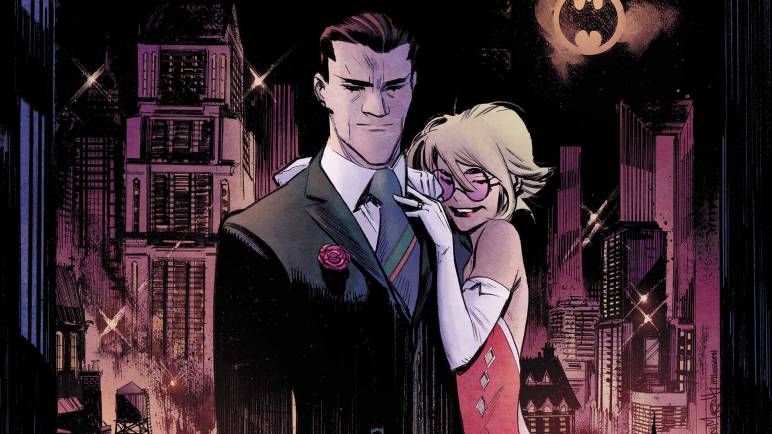 After reading Sean Gordon Murphy’s Batman: White Knight, I realized that the line between “good” and “evil” or “hero” and “villain” could often be blurred. The graphic novel, written under DC Comics Black Label, showed a different take on the dynamic between Batman and the Joker that we have never seen before. After being beaten almost to death, the Joker pleads to Batman that he could change. Dark Knight shoves down a couple pills, meant to medicate insanity, down the the throat of the Clown Prince of Crime. When the Joker is taken to custody, he starts to become more sane and starts referring himself to his given name: Jack Napier.

Many of Gotham City’s citizens are skeptical of the newly redeemed Jack Napier but he cleverly gets out of prison but this time, he does not escape like he usually did as the Joker. Jack Napier appeals to the people that his joker persona was a lie.

The redeemed Joker vows to start a new life in order to restore Gotham City to a safe city without corruption and without the Batman. Obviously, Batman does not believe Napier and keeps an eye on him while the former villain uses Backport, a community of minorities, low income earners, and high levels of crime to gain support in his crusade to become councilman. And he has none other than Harley Quinn at his side, as always, to do his bidding. It seems that Gordon Murphy wrote Backport to represent the current divide going on in the United States of America; the division between two political party’s, the division between the patriarchy and feminism, the division between all races, the division between rich and poor, and so forth.

As Napier becomes popular, Batman and the Gotham City Police Department become less popular due to Napier continuing to expose the corruption and the apparent hypocrisy of Gotham’s elite. This leads even Nightwing, Batgirl, Commissioner Gordon, and many others to slowly distance themselves from the Batman and question his methods. The story ends with a really poignant twist that I don’t want to spoil but it is a twist that I felt would make people understand why Jack Napier was actually the hero Gotham needed while Batman was the hero that Gotham deserves, in reference to Christopher Nolan’s Dark Knight.

Another Nolan reference that came to mind while reading this novel was the quote that Harvey Dent (Two-Face) said: “You either die a hero or you live long enough to see yourself become the villain.”

I feel that Muphy Gordon’s writing used that quote as the theme of White Knight. Murphy’s Batman, started out as a myth and then an ally to the GCPD, eventually became to be viewed as a villain when the Joker, under his Napier persona, exposed the danger Batman presented to the people of Gotham by only protecting Gotham’s wealthy elite and enacting his war on crime in the low class areas like Backport. In addition, Batman’s seemingly unwillingness to share his technology with the Gotham Police was also brought to question by Napier.

Overall, I enjoyed this comic and it wasn’t just because I am a Batman fan. Gordon Murphy’s writing really showed me how Batman and Joker are almost one in the same. As a result, Murphy Gordon has become one of my Batman writers next to Grant Morrison and Frank Miller.

Murphy used his writing to show how Batman and Joker are like two sides of the same coin or a yin and yang. Harley Quinn pointed out that the Jack was so much like Batman and that they actually both wanted the same thing: to protect Gotham and make it safe. I also loved the art done by Murphy and the coloring by Matt Hollingsworth.

Not to digress, but I felt that other mediums have used the same brilliant dynamic that Murphy used between his Batman and Joker to tell their stories. In WWE, Becky Lynch seemingly a “villain” had the fans turn on Charlotte Flair who was a “hero” by reminding them that the latter had everything handed down to her because she was the daughter of Ric Flair. As a result, just like the people of Backport rallying behind Napier and turning on Batman, the WWE Universe rallied behind Lynch and turned on Charlotte Flair. In a sense, it can be argued that Becky Lynch and Charlotte, like Batman and Joker, are two sides of the same coin; both are competitive want the same prize: the WWE Women’s Championship. Could Becky Lynch aka the Irish Lasskicker, and now the self proclaimed “Man” be WWE’s Jack Napier or White Knight? Perhaps, Jack Napier and Harley Quinn would agree and maybe that is what the higher ups at the WWE are cleverly leveraging.

I read an article where Sean Gordon Murphy plans on writing a sequel to the White Knight that centers around how Napier became the Joker and what actually happened to Jason Todd in that reality. The book is set to come out in Sept. 2019 and I am looking forward to reading it. Overall, Batman: White Knight has become one of my favorite Batman stories since Batman: Year One, Batman: Dark Victory, and Batman and Son and it is a must read even if you are not a Batman fan.